06 May News Alert: The Bond Market Wiped out $36 billion of Capital from Community and Mid-Sized Banks in the First Quarter

Posted at 14:57h in Intel, Invictus Blog by billie jackson

The bond portfolios of community banks are on fire right now, in a very bad way.  With 99 percent of community banks filing their first quarter Call Reports for 2022 as of the date of this article, we now have a sense of how big of a fire we are talking about. And it’s a lot bigger than even I imagined. And it’s going to get worse because bond yields have only increased since the March 31st quarter end,  and as we all know, an increase in bond yields means a decrease in the fair market value of the bonds.

The difference between the fair market value of the bond portfolio and its amortized cost can be found in a wonky line item on the shareholder’s equity of the balance sheet called Accumulated Other Comprehensive Income, or otherwise known as “AOCI.” Most community banks classify the vast majority of their bond holdings as “available for sale,” which means that any changes in AOCI do NOT flow through the P&L, but still impact shareholders’ equity.

Most community banks opted out of AOCI counting as capital in their regulatory capital calculations under the U.S.’s implementation of Basel III which occurred roughly 8 years ago. However, shareholder value is often a function of a bank’s tangible book value (TBV), and unfortunately for community banks, most investors do count AOCI in their TBV calculation.

Invictus Group has analyzed the AOCI positions using Call Report data as of March 31, 2022. Below are 10 observations that left us in a state of disbelief: 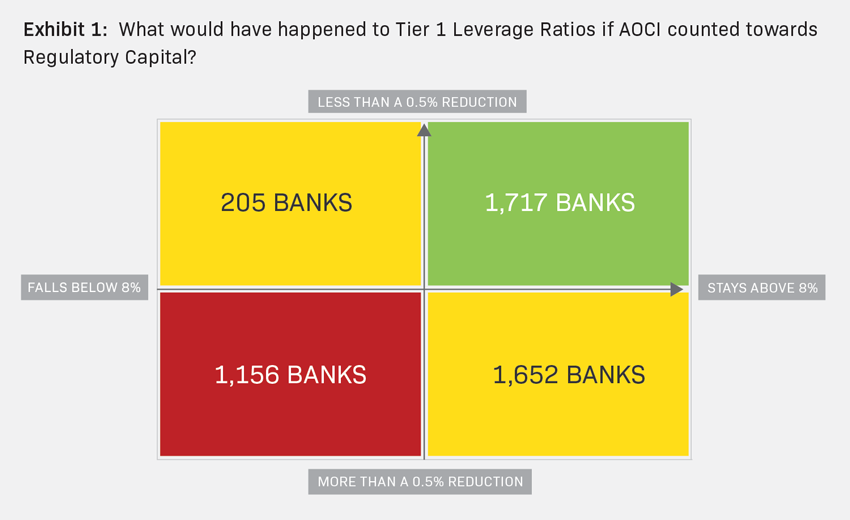 How does my bank stack up on these metrics and how do I compare to my peers?

Invictus Group is happy to prepare a customized report for you, free of charge. Just send me an email at amustafa@jamg23.sg-host.com with your name, title, bank, and location and I will reply back to you.

What does this mean for community banks moving forward?

The short answer is that it depends what bucket you are in. If you are in the green bucket in the above chart, this is probably less of an issue. It is still in your best interest to be prepared to tell your story in a pre-emptive manner because the regulators will be coming guns blazing on this issue and you don’t want investors to lump you in with the rest of the market.

If you are in one of the yellow buckets, the sense of urgency should be higher because regulators will be presuming guilt until innocence is proven and investors will be concerned about the size of these losses.

However, if you are in the red bucket, then you need to rip up your strategic and capital plan and write a new one ASAP, because the MOUs and consent orders are likely coming if you do not have a plan to rectify this situation.

Unfortunately, monetary policy and the performance of the bond market moving forward is far more likely to exacerbate these issues as opposed to repair them. Mark my words — examiners will not rest on their laurels because AOCI does not count toward regulatory capital, if the AOCI is in severely negative territory. Nor will they be satisfied just because you show them a favorable EVE calculation in your ALM model, even if you believe that is unfair.

How do community banks tell their story?

The challenges that banks face right now with respect to their bond portfolio will impact most of the letters within the CAMELS framework. However, the two most important letters are the “C” and the “L”. I would strongly recommend that community banks in the yellow and red boxes perform a well-designed stagflation stress test, which is also coupled with a 30-day Liquidity Coverage Ratio stress test.

For banks in the green and yellow buckets, this analysis will likely demonstrate the Bank has the ability to withstand such a scenario by maintaining sufficient levels of capital without having to realize significant losses in its bond portfolio by having to sell securities to manage liquidity. If there are shortfalls in either capital or liquidity, management can design and overlay a contingency plan to rectify them.

Banks in the red bucket will likely be more in active strategic planning mode. There are solutions to help mitigate these issues. Those banks should also be prepared to run a capital stress test paired with a liquidity stress test to demonstrate their strategic plans are sufficient. Do not wait for the examiners to come and tell you to do this. Because they are likely to tell you in writing through MOUs and consent orders.

Invictus Group specializes in helping banks run the recommended stress tests and rework their capital and strategic plans to help banks navigate through these choppy waters and demonstrate to their stakeholders they have command over the challenges they face. Please feel free to email me at amustafa@jamg23.sg-host.com if you would like more information regarding our services.