Why Banks Need to Get Ahead of the COVID-19 Economy

The one thing we know about the future economic impact of COVID-19 is that we do not know what it will be. The internal optimist in all of us hopes that the lockdowns start to unwind, the economy quickly returns to business as usual, and loan losses are modest because the modifications and Paycheck Protection Program (PPP) loans worked.

However, such a scenario is becoming less plausible as time passes. Even a phased approach toward reopening the economy will present significant challenges to community banks, both in the near and longer term. In the near term, deferral periods will end on modified loans and many borrowers are likely to struggle with their normal debt service obligations. Over the longer term, structural changes to the economy will affect the business of community banking.

Using baseball as an analogy, we are now in about the bottom of the second inning and the rest of the game has yet to be played. Those banks that manage the early innings well will put themselves in the best position for the later innings, where the game is almost always won.

Luckily banks entered the game in early 2020 in good economic shape. Every depository institution, every credit union, every platform lender, and every non-bank lender will see problems moving forward. More than 36 million had filed for unemployment as of May and the majority of consumer-based businesses are closed. Consider:

Before a bank acts, it must understand the potential implications of its actions so management can design tactics that will produce a competent defense. You want to keep every advantage you can. How can you do this? The answer is a well-designed stress test that must have a harsher economic impact than the Federal Reserve’s CCAR severely adverse case scenario, published in February.

Just as in baseball, you need to assess what capability you have to defend against your opponent (in this case, the economy). And since there is no equivalent or history to reference, anyone who tells you to run a stress test based on regression or using canned software is providing bad advice. That first stress test needs to be done now, and it should be based on 2019Q4 or latest 2020Q1. This will give you a clearer view into the vulnerability and capital risks for your existing loan book. The information you get out of this will form a baseline. It should tell you where your risks are, what your capital levels will be under severe stress, and hopefully provide information to let you employ some short-term tactics.

What is clear is that you can’t let the game get away from you in the early innings. If you shut down clients, you may lose them if they survive. Conversely if you don’t move quickly enough, you can find yourself left with severely marked-down collateral and behind in the later innings. The well-designed stress test will give you that perspective.

This is the heart of the game. Here’s what you might expect:

Different states will re-open at different times, attempting to balance public health and economic factors. If there was ever a time that community banks are prisoners of their footprints it will be the result of staggered openings of the commercial entities in their areas and the redeployment of an unemployed workforce.

Again, we have no history to see how this might evolve. The only way to look at your position is with a stress test. In the middle innings you’re not only stressing what was on the books at the beginning of the crisis, but now you also have to stress loan modifications, committed drawdowns, the cloudy economic recovery picture, and secondary effects such as an open business with a broken supply chain.

A well-designed stress test will give clarity to senior management about whether tactics employed in the early and beginning of the middle innings is working.

Structural changes to the environment will start to become more apparent. This is when a community bank’s strategy can begin to emerge, though steps taken in the earlier innings will boost its pathways to success.

Crises are often said to accelerate trends that have already been in place.

The incremental opening of states and businesses does not mean these businesses return to profitability immediately. Look at the restaurant business as an example.

The economy may come back stronger than before, but it will be different. Winners and losers will become more apparent. Banks that have weathered the early and middle innings may see opportunities. Your customers will be doing things differently. So will you.

Don’t forget your own cost structure. Companies will be doing more with less—employees, travel, entertainment, real estate. Will your branch structure still make sense? How much can move over to technology?

The late innings will determine if you win or lose the game and get to go to the playoffs. Understanding what’s happening in your footprint, given your lending and deposit bases, will suggest your ongoing strategy. The structural shift will be unprecedented. The only way to see through it is with stress testing. All this needs to be custom designed for your bank. No off-the-shelf computer software will give you the depth or capability to see the big picture and apply it to your bank’s unique situation. Stress testing is not just for your regulators. Most importantly it’s for management to define strategy and tactics.

One enormous unknown will be the interest rate environment: both the absolute level and shape/slope of the yield curve. The Federal government is going to have to borrow massive/records amount of money in the 2nd and 3rd quarters of this year—considerably more than in the aftermath of the 2008 crisis. While the Federal Reserve can take in some of this paper through the QE program, the market will have to absorb the rest. This could mean a classical capital market “crowding out” environment in which corporate and municipal borrowers either pay a lot or just don’t have capital available. We don’t know what that will do to rates, and further we don’t know how that will affect inflation in the later years. But for sure, both inflation and rates will have an enormous impact on community banks and their customers.

The well-developed stress test for the late innings is going to be crucial for strategy. It will determine if the tactics employed in the early innings will leave you competitive, or if you need to change course.

The end of the game

To complete our analogy: a baseball game doesn’t have a time frame like basketball or football. Innings can be short or long. We don’t know how long each of the above phases is going to last or how long it’s going to take to complete the game. Be prepared for extra innings.

You need to be stressing your bank at every step along the way. You don’t want to reach the eighth inning and realize that you should have pulled your pitcher in the fourth. And conversely you don’t want to use up all your relief pitchers too early. 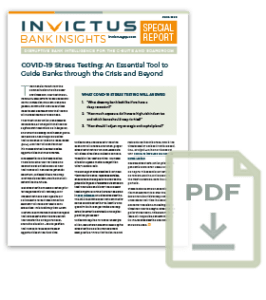