22 Apr The Hidden “Surcharge” Embedded in the CBLR

The Federal Reserve approved a simplification of the capital rules for the large banks on March 4, which coincided with the beginnings of the collapse in financial markets due to COVID-19. So, what does this have to do with community banks and the Community Bank Leverage Ratio (CBLR)? On the surface, nothing. But a careful comparison analysis shows that the long-term CBLR threshold of 9 percent imposes a hidden surcharge for community banks. I am going to coin this the “G-SUB Surcharge” for “globally systematic unimportant banks.”

For most community banks, this surcharge is totally unnecessary. They only have themselves to blame and not regulators if they choose to opt into the CBLR framework without doing the right analysis first.  Community banks that blindly opt into the CBLR will be negating a material capital advantage they have over the large too-big-to-fail banks.

The takeaway from the new capital rule for the large banks is this: Regulators incorporate each bank’s CCAR stress test results into the capital requirements for their risk-based capital ratios. This is accomplished through the creation of the Stress Capital Buffer (SCB).  The SCB is equal to the drop in the capital ratio from today to its post-stress trough.  For example, if Bank X had a 9 percent Common Equity Tier 1 (CET1) Ratio today, but it dropped to 6 percent under stress, the SCB would be the difference, or 3 percent.  The SCB would include the next four quarters of planned dividends. Each of their capital requirements for the risk-based capital ratios is now based upon the sum of the following components: 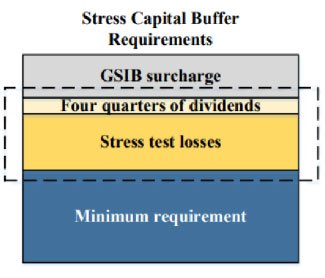 The last component is the most interesting. In 2013, the regulators via the Basel Committee concocted a way to penalize large banks for being ‘too big to fail’ through creation of the G-SIB Surcharge. This was implemented in the U.S. by regulators in 2016 using a ‘gold-plated’ approach that was far more stringent than other countries. The G-SIB surcharge for the large banks is customized and ranges between 1 percent and 3.5 percent of risk-weighted assets. Hold this thought for now, I will come back to it.

What’s this have to do with the CBLR?

In many ways, the large bank capital rules are vastly different than the CBLR.  In particular, the capital requirements for the large banks will be predominantly driven by the CET1 ratio, which includes the SCB and the G-SIB surcharge, both customized for each bank[1].  On the other hand, community banks that opt into the CBLR will be under a one-size-fits-all Leverage Ratio requirement, which starts at 8 percent and transitions to 9 percent by 2022. The CBLR is not a risk-based capital ratio. Two different approaches, two different ratios.

However, each component of capital previously mentioned has a specific purpose for the large banks.  We can de-construct the CBLR into these same de-facto components for community banks. Let’s take an oversimplified example of a community bank (“Bank A”) that opts into the CBLR. It also ran a stress test, which determined that its Tier 1 Leverage Ratio would decline from 11 percent to 8 percent under stress.  As a result, its de-facto SCB would be 3 percent of leverage ratio assets.  Since the regulatory minimum for an adequately capitalized bank under the Tier 1 Leverage Ratio is 4 percent, then simply adding the 3 percent de-facto SCB would imply that Bank A should have a customized Leverage Ratio requirement of 7 percent.  Remember, they are a community bank, so there would be no de-facto G-SIB surcharge added on top of this.

But Bank A opted into the CBLR. So, its actual capital requirement is 8 percent today, but will rise over the next two years to 9 percent. So, what accounts for the difference between the 7 percent estimated custom requirement calculated by using the same big bank capital concepts described in the previous paragraph and the 9 percent CBLR minimum?

Therein lies the hidden surcharge. Bank A is imposing a 2 percent surcharge onto itself once the temporary reduction in the CBLR expires in 2022. It’s essentially penalizing itself for being a globally systemic unimportant bank, or as I call it, the G-SUB surcharge. So, if large banks that are too big to fail are getting a G-SIB surcharge applied to their capital requirements, and small banks are volunteering to have a G-SUB surcharge applied to their capital requirements, then how much of a benefit is there to really being a community bank?

The above analysis is oversimplified, but the concepts are very real.  Large banks fight tooth and nail for every basis point of capital when lobbying against the new capital rules. They spend millions of dollars on lobbying.  They dress up their balance sheets at quarter and year-end to attempt to manage their G-SIB surcharge. They make strategic decisions and spend many millions of dollars to manage their CCAR stress test performance because they know it impacts the SCB.

Meanwhile, many community banks will just hand over unnecessary capital to the regulators like it is sand on a beach.

I highly caution community banks from taking too much solace in the temporary reduction in the CBLR ratio to 8 percent. As of now, regulators want to phase out that reduction. Some community banks may choose to opt in now and then opt out when the ratio hits 9 percent again on Jan. 1, 2022. But that is risky since community banks will need to justify their reasons for opting out to regulators at a time when they may no longer be focused on the calculations that prompted their decision to opt in, and won’t have the will to recalculate them.

Even though it’s almost time to file the March quarter Call Reports, which is the first time community banks can use the CBLR, banks do not need to rush into a decision about opting into the new framework. For more information on how to best approach the CBLR, click here for a special handbook free of charge.