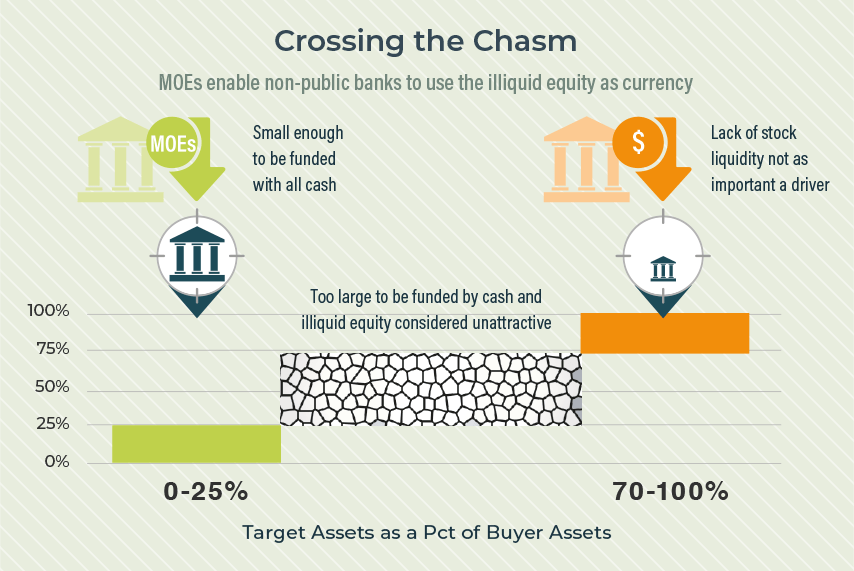 Last December, Virginia Partners Bank, which has $410.1 million in assets, announced a strategic merger of equals (MOE) with Delmar Bancorp, a $737.9 million holding company that owns The Bank of Delmarva. When the deal closes, each community bank will operate as independent subsidiaries of Delmar, keeping their names, management teams and boards.

Manatt Phelps & Phillips bank attorneys took notice when the deal was announced, writing that the MOE “may portend a revival of this oft-difficult-to-accomplish transaction as banks try to get bigger to compete without selling in their entirety.”

The back-to-back mergers of equals could be “harbingers” for similar bank deals, Morgan Stanley analysts declared. Mercer Capital managing director Jeff Davis predicted that “the industry could see hundreds of MOEs and quasi-MOEs among banks in the coming years because scale – or operating leverage – is important to drive returns.”

The reasons propelling larger banks to consider MOEs are different than for community banks. But many smaller institutions would be wise to include the MOE option in their strategic playbook if they are considering a merger or acquisition, especially if they can’t afford to buy a larger bank. Community banks that can produce loans but need deposits, and vice versa, may also make good MOE partners.

The community banking industry is littered with privately held community banks under $1 billion in assets that fall into one of the following two buckets:

In a myriad of ways, banks in each of these buckets are perfect marriage partners. Each bank’s strength addresses the other’s weakness.

Private banks can also look to acquisitions. Because their stock is often illiquid, they most likely will have to pay cash. As a result, their war-chests are limited, constraining the size of acquisition targets. On the other hand, an MOE presents a very different dynamic than an acquisition. The spirit of the transaction is not to represent an exit for either institution, but to combine forces to double their size and address their weaknesses with far more materiality than an acquisition would present. MOEs will be done as 100 percent stock transactions without the liquidity of either institution’s stock being a driving factor. Sure, there is a trade-off, especially since an MOE will be predominantly driven by social issues, but a $400 million bank with a 110% LTD ratio is far better off merging with another $400 million bank with a 65% LTD ratio than buying a $100 million bank with a 50% LTD ratio.

Another way to think about it is that there is a chasm in terms of asset size between what a private bank can acquire and with whom it can merge. For example, the same $400 million bank may have $8 million in excess capital and an additional $20 million of debt capacity at its parent company, but a $28 million war chest limits targets to banks with $200 million in assets at the most, and that’s a stretch. More likely, it will be looking at targets with assets between $100 million and $150 million. While helpful, these acquisitions pale in comparison to merging with another $400 million bank. The combined bank complements the first bank’s strengths, alleviates its weaknesses and creates an institution nearing $1 billion, armed with double the lending limits and the best-of-breed merger of talent across the two institutions. MOEs allow private banks to eliminate the constraints that acquisitions present in terms of size and materiality.

Just look to Michigan to see how an MOE can propel community banks forward. In March, two similar-sized Michigan community banks on opposite ends of the state announced an MOE. ChoiceOne Financial Services of Sparta, a $670 million asset-sized institution, plans to merge with County Bank Corp., of Lapeer, a $617 million asset-sized bank in a tax-free “reorganization.”  Together, they will become the 12th largest bank
in Michigan.

The company expects to be listed on NASDAQ after the deal closes. And the MOE also “opens the door” for the new bigger bank to make additional acquisitions in lower Michigan, investor materials state.

As a cautionary note, the announcement that an MOE is in the works does not mean it will be successful. Earlier this year, Knoxville-based Smart Financial, the parent company of SmartBank, announced an MOE with Entegra Financial Corp, owner of North Carolina-based Entegra Bank. But in May, Entegra paid a $6.4 million penalty to call off the deal. Entegra’s board decided to take a cash offer instead from $35-billion First Citizens Bank and Trust Co. of Raleigh, choosing liquidity upfront rather than the long-term benefits the MOE might have given it.