Posted at 15:38h in Uncategorized by billie jackson

M&A transactions initiated through an auction process have become de rigueur in the community banking marketplace. In the right situation, they have several advantages that include speed, limited due diligence and (generally considered most important) the opportunity to create a feeding frenzy that leads to a higher-than-expected price.

If you are a profitable bank that dominates an attractive footprint and your balance sheet and P&L reflect this position, then an auction is an excellent idea.

On the other hand, negotiated transactions have the potential to create far greater shareholder value, while also protecting employees and customers within a bank’s footprint. Unfortunately, community banks rarely pursue these types of deals through sheer habit, expediency and/or the absence of appropriate data and analytics.

For most community banks, whether a buyer or seller, the footprint by its very nature creates balance sheet strengths and weaknesses that are reflected in operating performance. This is where negotiated transactions provide the best option for shareholders, management and a bank’s client base. Smart investment bankers understand this.

It is the responsibility of management (in order of priority) to:

This is difficult to achieve under an auction scenario because:

There are numerous benefits to negotiated transactions because:

In summary, the benefits of negotiated transactions far outweigh any potential benefits from an auction for most community banks. It is unfortunate that many community banks, after spending decades building up their balance sheets and capital base, end their existence in the uncontrolled chaos of an auction.

Some bankers mistakenly think they are fulfilling their fiduciary obligation by conducting an auction. They assume that if they only talk to one buyer in a negotiated deal they may not be getting the best price. This, of course, is a myth.

While the concept of a selling bank using the right analytics to investigate and thoroughly analyze potential acquirers seems new to the marketplace, it is one of the most valuable actions management can take to maximize shareholder value. Negotiated transactions allow banks to take a proactive approach to M&A, gaining a competitive edge and solving their deposit issues. 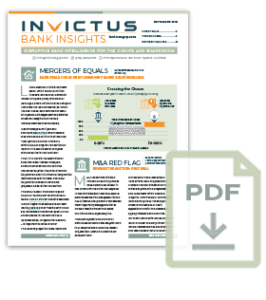