Posted at 15:36h in Uncategorized by billie jackson

Community bank stock prices are down, and M&A transactions have dwindled, a reality that is troubling on many different levels.

The drop in bank stock prices and the corresponding decline in valuation of private banks has created an insular, fairly disturbing and increasingly shortsighted climate for both sellers and buyers. Buyers feel that their currency is too undervalued to use for acquisitions, while sellers believe that their values are too depressed to consider selling. As a result, even though the need for M&A has never been greater and the timing has never been better, community bank M&A transactions are few and far between.

The only good thing about this bizarre situation: It creates an extraordinary opportunity for the farsighted to separate themselves from the pack and exploit the existing opportunistic vacuum in M&A activity.

Let’s look at the big picture in the community banking market, rather than the intensely introspective and limited approach prevalent in the marketplace. 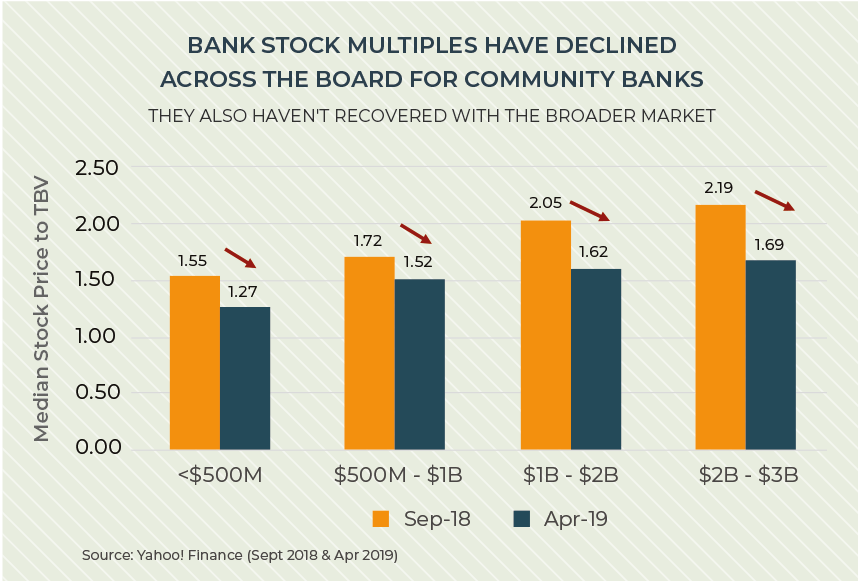 Bank stocks are down because the markets correctly perceive difficult times ahead for the banking industry. At present, acquiring banks fall in two different camps.

Group 1. Hunker down and ride out the storm, while bemoaning their depressed stock price levels.

Group 2. Capitalize on the fact ‘that the number of buyers are down and the number of unsolicited targets available is greater, allowing them to use M&A to attack and overcome the “difficult times ahead.”

Group 2 has an exceptional level of weapons and advantages in this environment. Please consider the following:

Simple acquisition structuring templates can easily embrace the two possible extreme scenarios and most variations within these boundaries. These structures, which have been used successfully across many industries, will benefit both buyer and seller. While this article isn’t focused on structuring issues/opportunities, the following simple example should be enough of an outline of a baseline framework to understand the value of a creatively structured M&A transaction:

In such a transaction, if stocks do not recover, both parties have done a valuable transaction in the new “reality”. If stocks do recover, the acquirer has successfully consummated an attractive transaction that would most probably further enhance the stock recovery, while the seller gains their proportionate pricing value.

While the actual structuring will be more complex than the aforementioned, correctly done, there are substantial benefits for the seller and buyer with meaningful capital adequacy benefits for the buyer.

If senior management of both buyers and sellers can open their minds and turn on their creative juices, they have tremendous opportunities in this present lackluster M&A market. Their biggest problem will be convincing the occasional insular and recalcitrant director, obsessed with present-day stock prices, to see the longer-term picture.

Here’s why an understanding of the past — and a glimpse of the future ­— should allay those director M&A misgivings.

A lot has changed since the 2008 recession. Arguably, the biggest and most significant trend has been taken for granted. Quantitative Easing (QE) injected over $3.5 trillion into the US market, driving down interest rates and flattening the yield curve for an extended time.

QE was also the catalyst behind an unforeseen and generally ignored change in the community banking market: the shifting of the balance sheet.

In the 10 years after the recession, community bank deposits more than doubled, with a steady decline in their cost. These increasing levels of low-cost deposits funded a consistent increase in asset growth for many years. (See Charts 1 and 2). 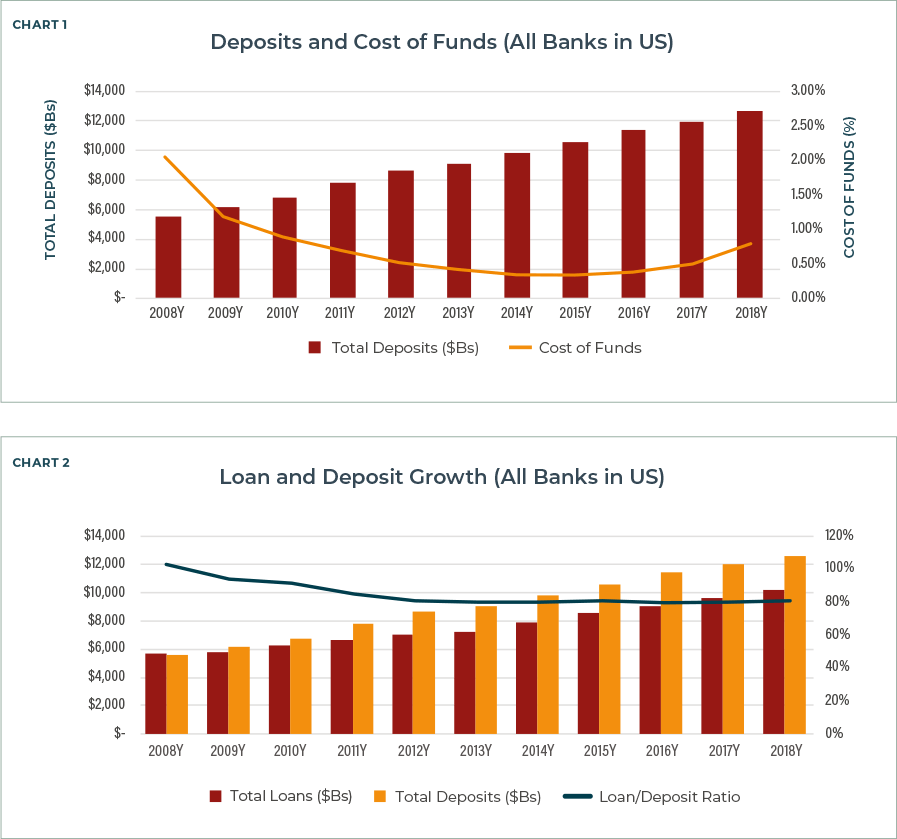 Unfortunately, the QE injection of funds/liquidity into the marketplace has abruptly stopped. Deposits that were largely discounted and ignored by the large banks are now in demand, resulting in increased competition and market driven rate increases. 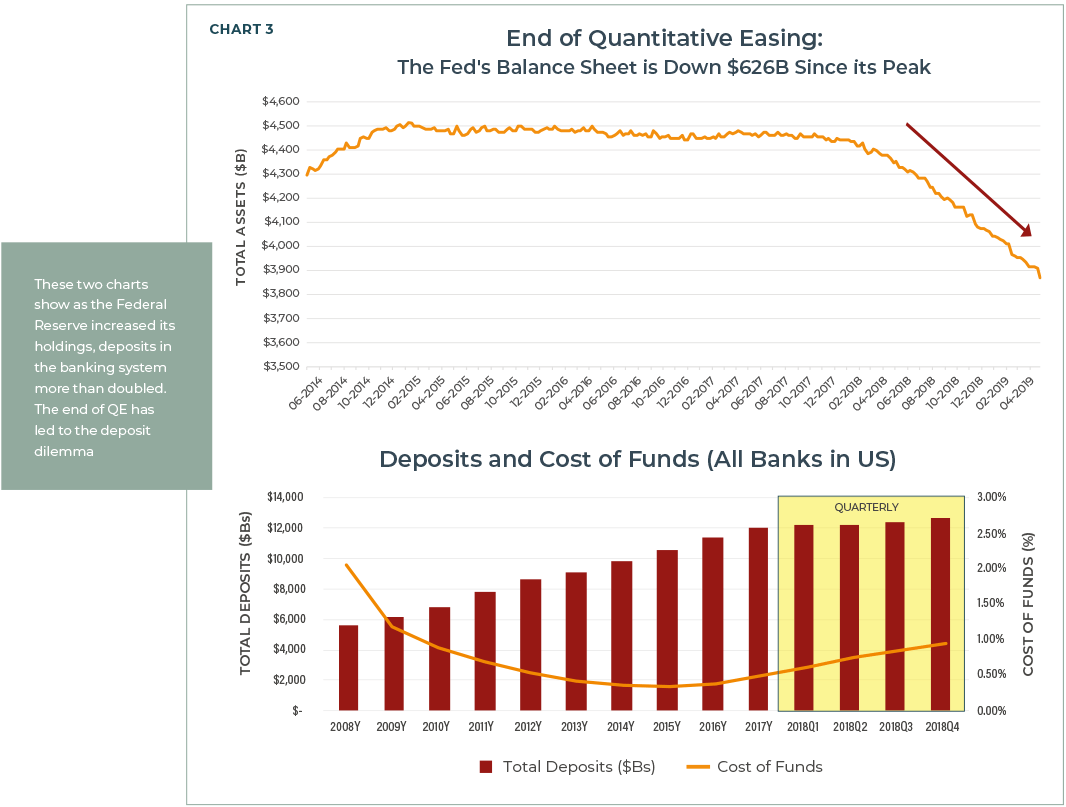 While most bankers recognize the lack of growth in deposits and market-driven rising costs, some of the long-term implications are not as visible:

The last 10 years created a new class system of banks: banks in high-growth areas that have profitability exploited these markets and ended up with high loan-to-deposit ratios, and banks in relatively low loan growth areas that have relatively poor operational profits, but low loan-to-deposit ratios and cost of funds. These two classes create a unique M&A opportunity for the enterprising banks that have the foresight and creativity to capitalize on the present environment.

Wake up and smell the deposits. 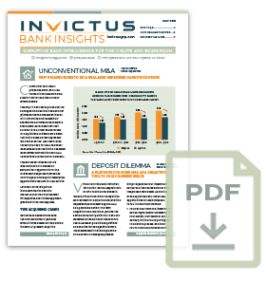