Lack of data is by far the biggest obstacle for banks as they begin figuring out how to implement the new current expected credit loss (CECL) accounting standard, which will go into effect for many public banks in 2020. Even the simplest of methods, such as the open pool method, require a certain amount of historical loan-level data.

Banks face a litany of problems with respect to leaning on internal data for CECL, but here are the three most common obstacles:

What Can Banks Do to Solve the Problem?

CECL will have winners and losers. Winners will preserve precious capital by making sure their CECL reserve is optimized. The losers will undoubtedly wind up burning shareholder value because of excessively high reserves driven by overreliance on qualitative factors. What will separate the winners from the losers will be the quality and quantity of data they use to support their conclusions.

I have discussed CECL with hundreds of bankers and only a handful can say with confidence that they have enough internal loan-level data to calculate their CECL reserves.

What can banks do about these internal data challenges? The truth is there is no panacea. However, more data is always better than less. The banks that have the best data and analytics will end up with a competitive advantage. Banks that approach CECL seriously will recognize they cannot just rely on their internal data and will take steps now to find external data to enhance their CECL process.

Editor’s Note: To address the data problem, Invictus will soon be inviting banks to participate in the BankGenome™ Project, a data-sharing cooperative. 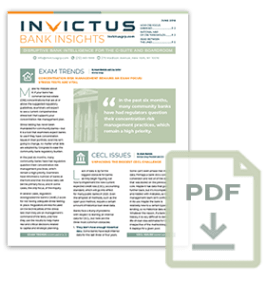