01 Jan CECL Myths and Realities: Why Small Banks May Benefit from the New Accounting Standard

CECL Myths and Realities: Why Small Banks May Benefit from the New Accounting Standard

Small community banks may actually benefit from the new Financial Accounting Standards Board’s current expected credit loss (CECL) model, even though they will face the toughest challenges in implementing the forward-looking process, according to a new Invictus Consulting Group analysis of banks with assets below $50 billion. The analysis also found that: 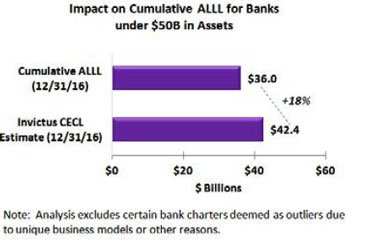 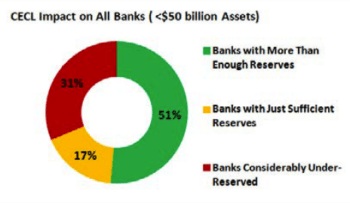 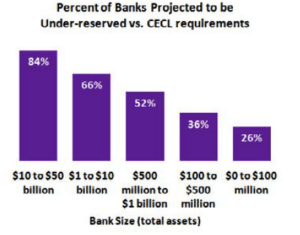 These findings fly in the face of nearly everything reported about CECL in the last 12 months. When the proposal was first debated, even regulators suggested that it would in- crease loan loss reserves by 30 to 50 percent, especially for community banks. Those estimates were computed when the economy and the banking industry were still in the  early stages of recovery from the Great Recession. Times have changed.

Invictus calculated its CECL study by using its proprietary capital stress testing system, but turning off the stress and adjusting the time horizon to reflect the “life of a loan” concept underpinning CECL. The Invictus stress testing system is uniquely qualified to perform this analysis because the methodology is consistent with the main CECL principles: loan portfolio segmentation, vintage analytics,  expected loss modeling and risk rating migration patterns.

There are several logical reasons why smaller banks should be less exposed to CECL, as revealed by the analysis: 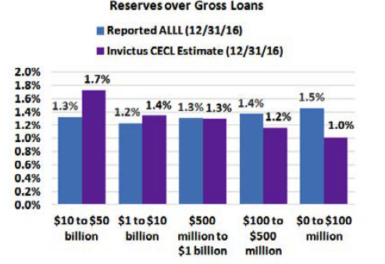 Despite the inconvenience and cost of implementing CECL, the silver lining for community banks is that the data shows that many of them should benefit from it. Please read on for how to prepare for CECL in the short-term.