Read Between the Lines

Each month Bank Insights reviews news from regulators and others to give perspective on regulatory challenges.

The FDIC’s proposal to change the way it assesses deposit insurance for small banks will have an adverse impact on banks with a high concentration of construction and development loans, bankers complained at the latest FDIC community bank advisory committee meeting. That’s because the rule would count such loans as high-risk under a new loan mix index, primarily because those types of loans contributed to a large number of community bank failures after the 2008 recession.

There is one way that banks with large concentrations of C&D loans can mitigate higher assessments, advised Diane Ellis, FDIC Director of Insurance and Research: Increase capital levels.  “The way the formula works, that would reduce the assessment of a bank,” she said.

Bank CEOs at the meeting said the FDIC was indirectly penalizing banks because of their business models. “We’re approaching this like most insurance companies do,” Ellis responded. “They look at the portfolios of risk they are underwriting. Certain business models create higher risk and that is what we are trying to charge for.”

In a comment letter, Carl Dodson, EVP and COO at John Marshall Bank in Reston, Va., said the proposal would increase the $831 million bank’s premiums by more than 30 percent to more than $500,000 yearly – even though the bank’s financial performance has improved since the recession.   “Well run banks fueling economic growth and located in strong markets should not have to pay higher assessment rates due to what has been partially caused by weak regulatory oversight of reckless lenders,” he wrote.

The following map shows which states would be most negatively affected by the proposal. 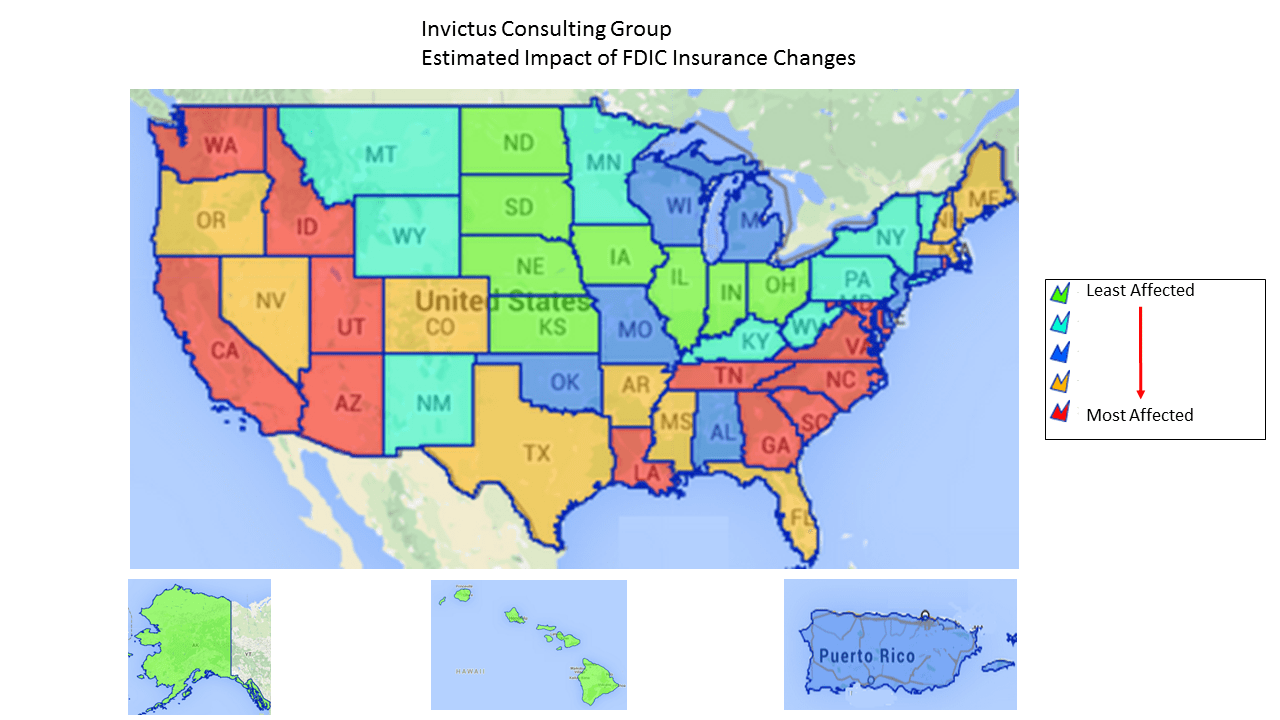 The prudential regulators want all CEOs and boards to understand and determine their institution’s overall cyber risks. The FFIEC has released a cybersecurity assessment tool to help. The FFIEC stresses that CEOs and the board must develop plans to conduct a cyber risk assessment and institute risk management practices to mitigate potential problems.  The tool allows banks to calculate their inherent risk profile and cybersecurity maturity level.

Take note: The Consumer Financial Protection Bureau fined RMP Mortgage Inc. and its CEO for illegally paying bonuses and higher commissions to loan originators who steered consumers into costlier mortgages. The fines would total $20 million, including a $1 million civil penalty to be paid by the CEO individually.  Banking experts warn lenders to review their loan originator compensation plans now. Failing to comply can disqualify loans from being considered qualified mortgages, which can have serious implications.

The FDIC is working on a vendor management video to be completed by the end of year that will include  case studies, according to  Doreen Eberley, Director of the Division of Risk Management Supervision. She told the July community banking advisory meeting that the FDIC is also updating its videos on interest rate risk management and putting together a new practical handbook for directors .  The guide will include information about corporate governance, risk management and ethics, with particulars on how a director’s responsibilities differ from day-to-day management, how to develop a sound business plan and a robust strategic plan, and ways to effectively communicate with examiners.  The handbook will also discuss the differences between rules, guidance and best practices.