Under the Dodd-Frank law, banking institutions with consolidated assets of between $10 billion and $50 billion were required to conduct company-run stress tests and release the results publicly for the first time in June. These banks performed stress tests for regulators last year, but the results were private since they were considered a test run.

This is far different than the Comprehensive Capital Assessment and Review (CCAR) tests mandated for the largest U.S. banks and run by the Federal Reserve since 2010.  Those tests are much more stringent, are subject to supervisory approval, and require the submission of an annual capital plan, which regulators can reject.

Regulators do not react publicly to the results of the mid-sized banks’ stress tests, but they do provide feedback through the confidential supervisory process. So what lessons can be drawn from this month’s release?  From our perspective, here are five key takeaways on both the process itself and the results:

The regulators are not thrilled with the caliber of the stress tests.


The regulators think that the stress tests submitted by these banks are lacking.  Too many of the DFAST banks did not take the process seriously or treated it like a ‘check-the-box’ exercise.  Senior management took a “no news is good news” approach when delegating the stress testing process to middle management.  Only a few  did a good job in properly tailoring the stress tests to their business model and geographic footprint.

Many of these banks (and the vendors with whom they work) acted as if their success meeting the requirements should be ‘measured in pounds’ – so they prepared and submitted voluminous paperwork. If you asked 10 risk officers at Dodd-Frank banks to name the two areas on which their bank spent the most time on during the stress testing exercise, they would unanimously say “documentation” and “validation.”  While these two functions are critical for best practices in stress testing, they also created analysis-paralysis, drowning the key insights at the CEO and board level.  One regulator who is heavily involved in reviewing the DFAST stress tests told me that, next year, those banks which can demonstrate they actually used the DFAST stress tests to help make a strategic decision will score “a lot more points” than those banks that submit a 5,000-page report.

The stock market by and large ignored  the results of these stress tests.


When discussing the results with our bank investor clients, most said they either didn’t care or didn’t place any weight on the stress test disclosures.  Indeed, there was little change in the trading of bank stocks before and after the stress test releases. There are several reasons:  This first is that the results are not comparable among banks.  The second is that most disclosures lacked an analytical narrative.  Where were the vulnerable points?  Why were the results the way they were?  And most importantly, what does this mean moving forward from a strategic perspective?  As one institutional  investor told me, all of the stress test results basically said the same thing: “Hey, we will still make money, just not as much, but our assets will grow faster than our earnings because of Basel III, which is why our capital ratios go down.”

Banks failed to focus on idiosyncratic risks in their stress tests.


This is what bothered the regulators the most – and for good reason.  Many Dodd-Frank banks took the national severely adverse case forecast published by the Federal Reserve and treated it as gospel. They should have designed a customized scenario more specific to their own footprint and idiosyncratic risk profile, while ensuring that it was comparable to the Fed’s stress scenario by using the amount of “pain” as the common denominator.  For example, a bank that concentrates in a “lower beta” market should have identified the macro risks in its market.  On the other hand, a bank with a large asset-based lending and factoring portfolio should have concentrated more heavily on operational risk and fraud as opposed to a systemic national recession (which could actually help it gain business).  This is a huge lesson for community banks and Dodd-Frank-light banks.  The mission is NOT to show how your bank would handle a national recession, but instead to show how your bank would handle severe events specific to your bank’s risk profile.

There is a significant gap in the loan loss rates between the CCAR and DFAST banks.


We define loan loss rates as the projected two-year loan losses under the stress test divided by the average loan balance.   The median loss rate for the largest 30 banks that participated in CCAR was 5.1 percent.  However, the loss rates we have observed from the Dodd-Frank banks that reported their results range from 0.6 percent to 2.5 percent.  In other words, there is a MASSIVE gap between the stress test results of the CCAR and DFAST banks.  On the one hand, there is plenty of controversy surrounding the stress tests of the CCAR banks since the Fed trumped the results submitted by the CCAR banks with their own models.  Therefore, one could argue that the CCAR loss rates are too high and stringent.  On the other hand, the loss rates projected by the mid-sized banks hardly feel like stress in comparison.   Until investors understand this gap and what is driving it, it will become very difficult to unpack value from the results of either group of banks.

Invictus’ proprietary analytics reveal that not all DFAST banks are the same.

The graphic below shows what would happen if all the DFAST banks were subject to a consistent stress test. While it is important to recognize that each bank would have different stress drivers based upon geography and business model –as we noted in point 3 above — the results have validity in terms of measure of pain.

Invictus uses publicly available data and the Fed’s economic factors to stress test every U.S. bank each quarter to see how they would fare in a severe downturn. Our methodology has proven to be an excellent indicator; when we get access to loan file from our bank clients, the stressed results are generally similar.

This graph shows considerable variance in bank performance under stress — although no bank drops below the 4% minimum, some may be surprised to see their performance, and many lose 2% or more in leverage ratio.

When we studied the results further, we found something that surprised us:  The primary difference between the strong performers and the weak was the vintage profile of their loans.  Those banks with heavier exposure to loans originated early on in the recovery (circa 2009-11) performed exceptionally well, while also generating better interest income.  On the other hand, banks that have experienced recent growth have more exposure to higher risk loans with lower yields.  The other interesting, but related finding, was that most of the banks have, for all practical purposes, weaned themselves off pre-crisis loans (circa 2004-08), which have either been paid off, refinanced, or charged-off by now.

In conclusion, the stress tests the DFAST banks conducted are a step in the right direction, but many banks need to probe their own bank more deeply to generate actionable results. 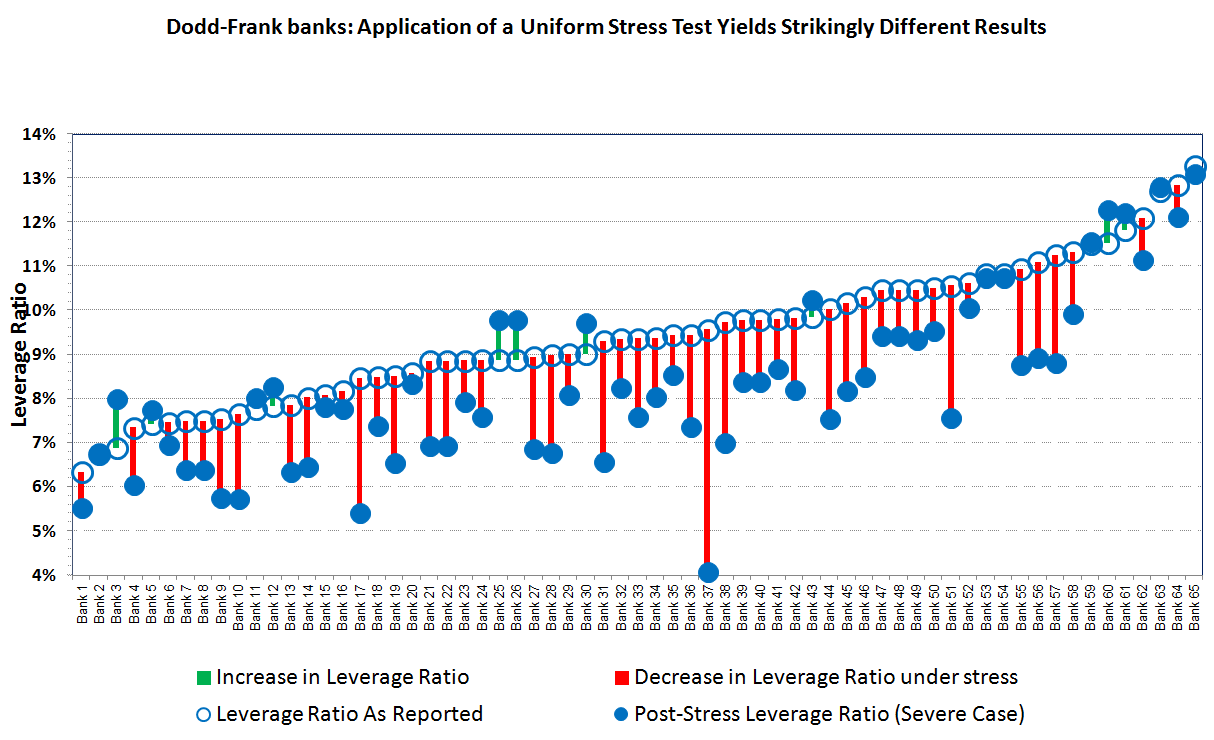