03 Mar Anatomy of a Bank Deal: Why New Bank Analytics are Essential in M&A

Anatomy of a Bank Deal: Why New Bank Analytics are Essential in M&A

The 2008 recession, the changes in regulatory capital adequacy methodology, and the current artificially low interest rate environment have all rendered traditional bank analytics obsolete.  Nowhere is this more apparent than in mergers and acquisitions.

Changes to regulations and the financial markets have necessitated new approaches to M&A methodologies.  Traditionally, merger analysis was based upon historical call reports, financial statements and loan review data.  In the new environment, it is imperative to evaluate a bank’s unique mix of assets, their earnings contribution and their capital requirements before forming an opinion of value.  Two banks with seemingly identical balance sheets may have very different earnings prospects and capital requirements:  loans will have different decay curves and vintages.  Credit terms will differ, and pricing may vary dramatically.

This Bank Insights article looks at two M&A deals from the past year in terms of capital requirements and earnings. The deals appear similar based on traditional analysis, but quite different when using Invictus’ proprietary forward-looking, risk analytics. In both transactions, a $1B+ serial acquirer purchased a small bank to enter a new market.  Each target was sold in an auction process with several bidders and received a price well over comparable market multiples. (We are not naming the banks, though these are real transactions.) 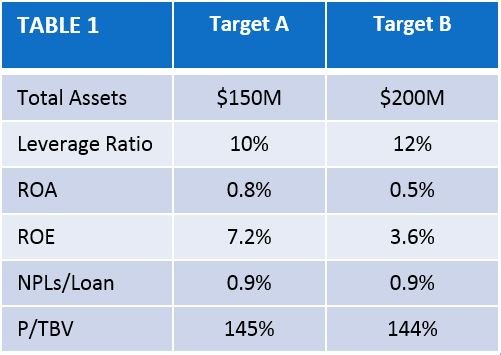 From an earnings standpoint, Target A looks like a stronger bank.  However, traditional metrics such as Return on Assets (ROA) and Return on Earnings (ROE) can be deceiving when evaluating potential acquisitions because they include the impact of operating efficiencies.  Once a target is acquired and integrated into the new entity, its operating efficiencies completely change.  The buyer needs to understand the pure earning power of the target’s loans, which will remain unchanged on the buyer’s balance sheet for years to come.  Loan earnings must be evaluated in terms of the capital required to support them, which can only be determined via a capital stress test.

Graphs 1A and 1B use the Invictus Ratio – which is calculated as gross interest income divided by the capital required to support the bank’s assets (as determined in a capital stress test) – to drive home the difference between the banks. The graph plots each target in terms of its Invictus Ratio (x-axis) and reported Leverage Ratio (y-axis), compared with their regional peers. 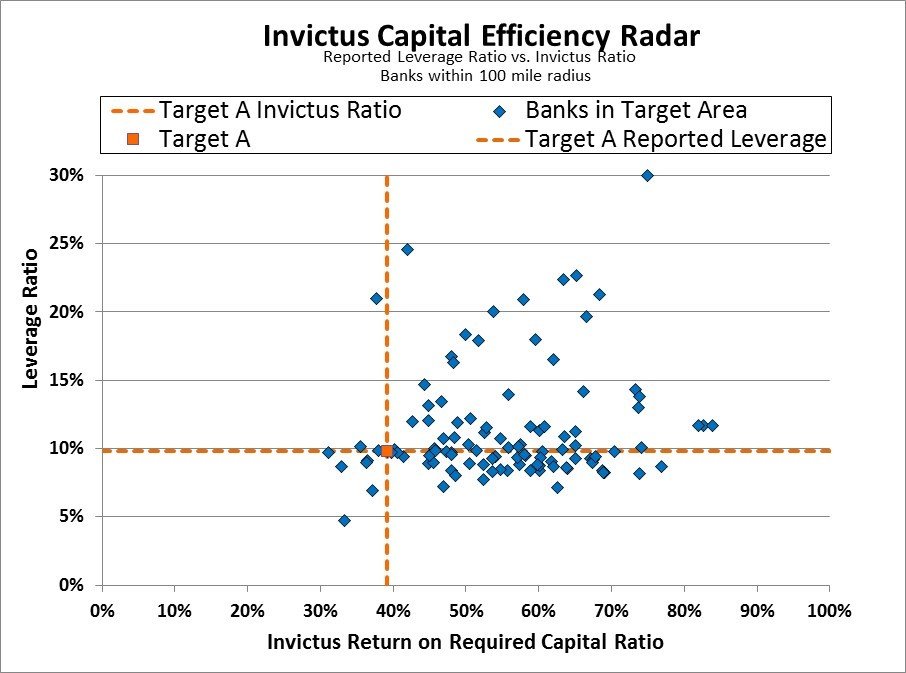 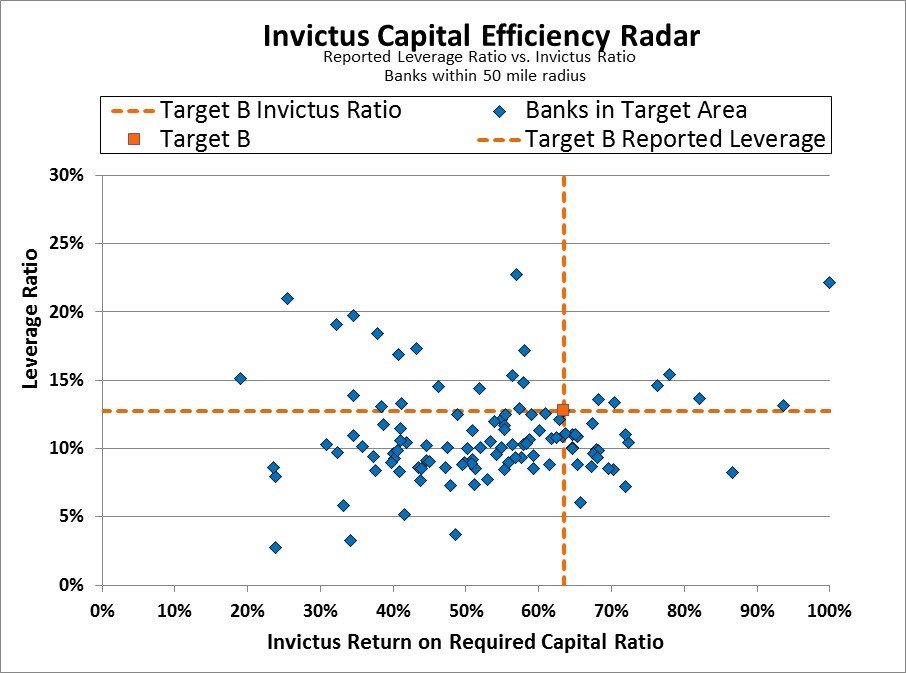 Target A reports a healthy 0.8% ROA but, as you can see in Graph 1A, it ranks well below its peers in terms of pure asset efficiency, with an Invictus Ratio of only 39%.  Under a two-year severely adverse case scenario stress test, the bank’s earnings fail to offset capital losses, resulting in a Tier 1 Leverage Ratio of less than the 4% minimum used by the Federal Reserve in its stress tests of the largest U.S.  banks.  Therefore, the bank actually requires more than 10% Tier 1 capital to adequately support its assets.  Target B, on the other hand, maintains a capital level well above the 4% minimum under stress, and requires only 6.5% Tier 1 capital to support its assets.  Although it reports a lower ROA than Target A, its assets provide a higher yield on required capital with an Invictus Ratio of 63% (Graph 1B).

You must analyze the bank’s reported earnings in relation to the capital required to support its earning assets to determine the true yield of a potential target.  In the case of Target A, the buyer would actually have to allocate some of its existing excess capital to the target post-acquisition, rather than deploying it into higher yielding assets or returning it to shareholders in a dividend.  The acquirer of Target B would gain excess capital from the transaction.  The excess capital that a bank has for discretionary purposes is known as FreeCapital™.  It has an effect on pricing that is ignored in most M&A transactions.

Graph 2 compares reported and post-stress capital analysis of both targets, where we use Tier 1 Capital as a proxy for book value. 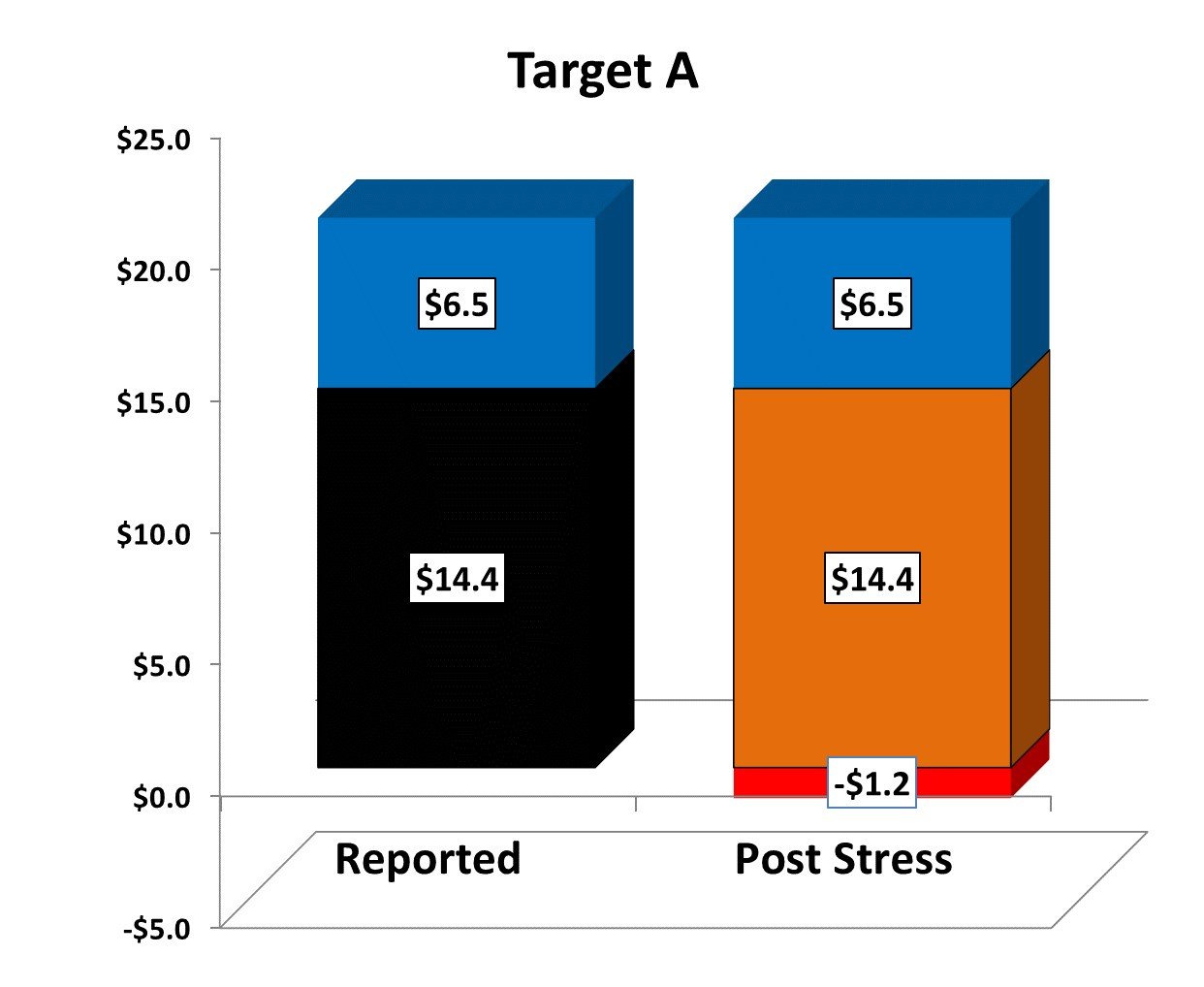 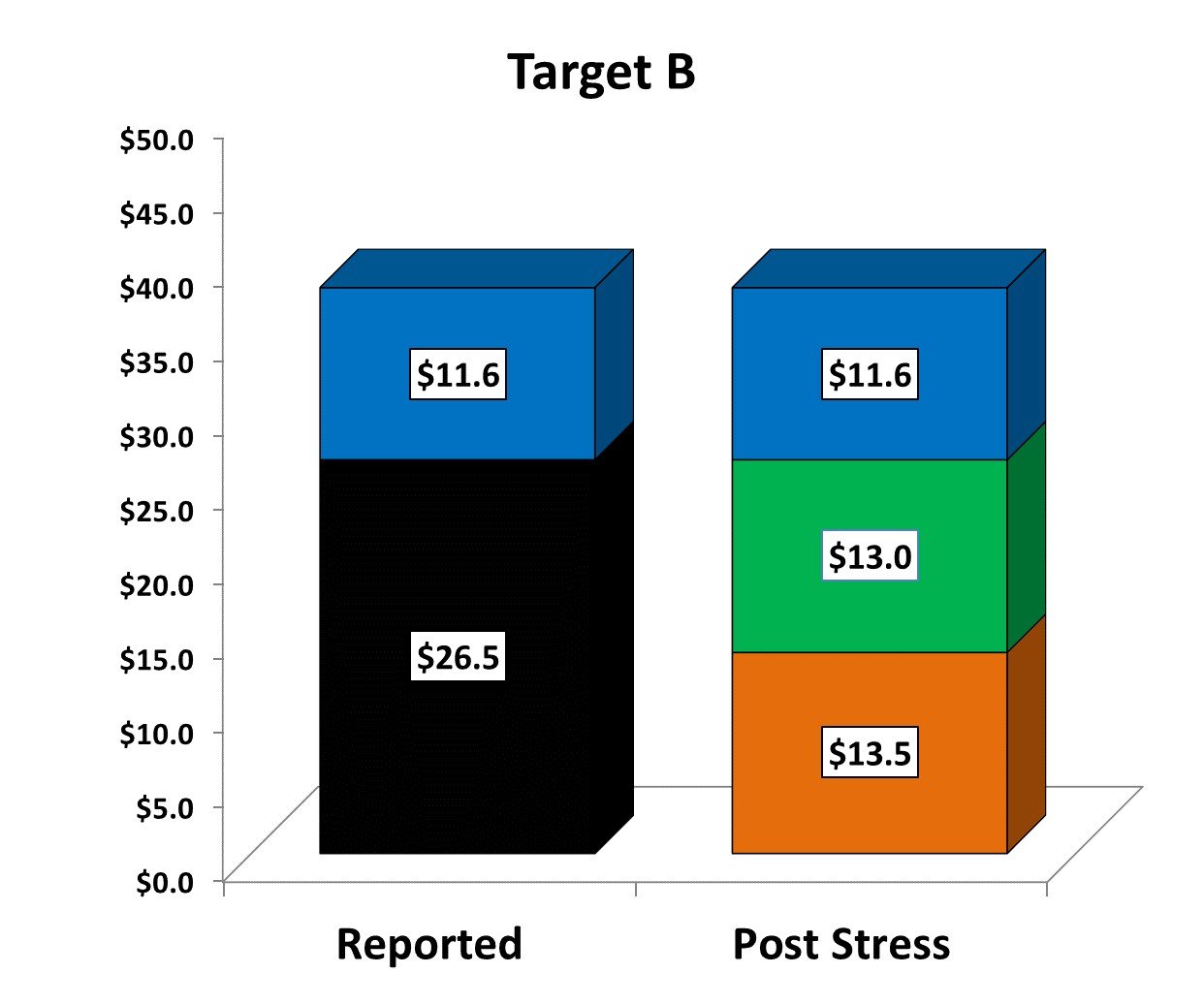 As Graph 2 shows, post-stress capital adequacy is essential to understanding potential targets and avoiding buyer’s remorse.  Target B has $13M of FreeCapital™ because of its lower capital requirement, which entirely offsets the $11.6 million premium paid and increases the capital flexibility of the buyer post-acquisition.  If we deduct from the purchase price the $13M of FreeCapital™ the buyer will gain from the transaction, the P/BV multiple declines from 144% to 95% (Graph 3B).  If we include in the purchase price the additional $1.2M of capital that the buyer will have to allocate to Target A post-acquisition, the P/BV multiple increases from 145% to 153% (Graph 3A). Stress testing to derive FreeCapital™ levels in acquisition targets is an analytical exercise that quantifies real tangible benefits/losses to acquirers. We are presenting these benefits/losses as an adjustment to acquisition multiples to best illustrate and quantify their impact. 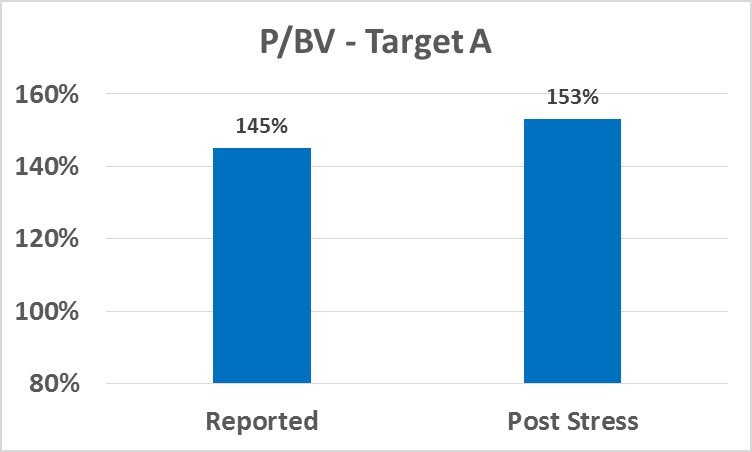 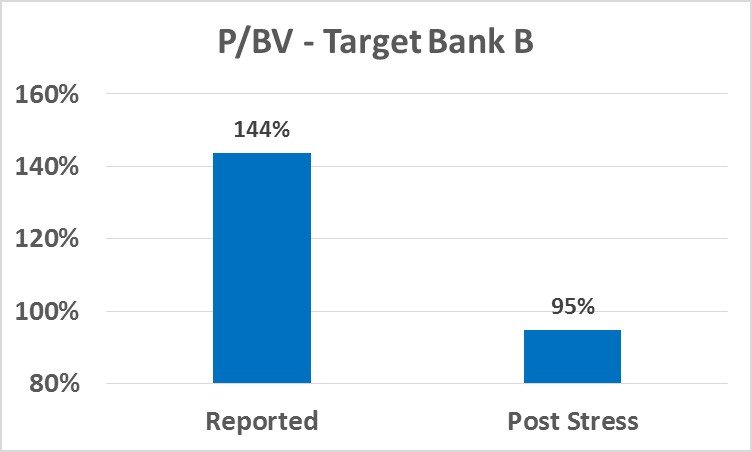 The buyer that evaluates targets on a post-stress basis has a powerful advantage when negotiating a purchase price because it knows the target’s FreeCapital™ and the target does not.

The long-predicted consolidation in the community bank market has begun and activity will increase over the next two to three years.  The minimum scale for a bank to operate and be successful bank has increased dramatically.  For smaller community banks, the M&A decision is a matter of when, not if.

This analysis is based solely on public data. Every M&A deal has its own unique costs and benefits that may not be reflected in this article. We just looked at one aspect that is important and should be considered, but the actual transaction might have had other unique characteristics that made it a compelling deal.

Stress testing is the only forward-looking way to evaluate the performance of loans in different economic environments and determine their impact on capital adequacy.  Measuring the consolidated assets of the buyer and seller, under stress, helps regulators to get comfortable with the capital adequacy of a transaction in the post-financial-crisis world.

As the anatomy of two banks shows, without this stress testing analysis, a buyer flies blind into potential transactions, and risks overpaying significantly.