05 Sep How Stress Testing Can Become a Bank’s Profit Center, Not a Cost Center

How Stress Testing Can Become a Bank’s Profit Center, Not a Cost Center

Stephen Lange Ranzini, CEO of University Bank in Ann Arbor, Mich., used capital stress tests to convince his primary regulators that the $125 million bank had excess regulatory capital. He says that the knowledge then gave the board of directors “the courage” to begin paying monthly dividends to the bank holding company.

Like Ranzini, many community bank CEOs across the U.S. are using capital stress testing as a tool to communicate their unique scenarios to regulators. (See Q&A, p.2) In today’s post-recession regulatory environment, banks must be able to show regulators that the bank’s strategic plans are workable, even if there is an economic downtown.

Invictus senior partner Adam Mustafa says stress testing should be a starting point for smart banks. “Our clients know that there are many stress testing applications. For starters, stress tests are the new calculator of capital adequacy for specific assets,” he says. They also help management identify vulnerabilities and key issues.

Beyond using the results of capital stress testing to mitigate capital requirements, banks can also use the tests to win approval for strategic initiatives. Invictus’ community bank clients have used their stress testing analyses to:

Stress testing can reveal the total amount of capital required to support a bank’s unique asset mix. Regulators don’t have the resources to stress test every community bank.  As a result,  their customization of a bank’s regulatory leverage ratio tends to be within a narrow and understandably conservative range.  A lower capital requirement increases the bank’s level of FreeCapitalTM, the difference between the capital on a bank’s balance sheet today and its regulatory minimum requirement calculated under a two-year pro forma severely adverse scenario.  And that capital comes at essentially no cost,which turns stress testing into a profit center.

FreeCapitalTM can be used to maximize a bank’s acquisition war chest, increasing the list of potential targets it might be able to buy. For instance, consider a $350 million bank with a 9.8 percent leverage ratio.  The bank used Invictus’ custom stress testing to lower its required leverage ratio to 6.5 percent, leaving the bank with $14.1 million in FreeCapitalTM. Using a ratio of 8 percent, the bank would have only had $5.8 million in excess capital. The extra $8.3 million increased the bank’s number of potential acquisition targets by 71 banks.  The graphic to the right illustrates this: 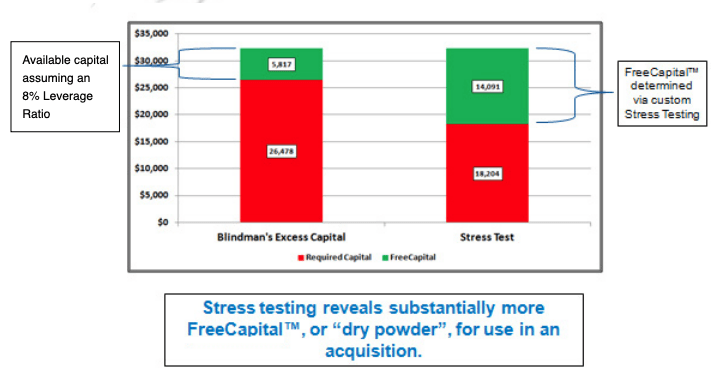