05 Feb Ways to Use the Invictus Acquisition Gauge

Ways to Use the Invictus Acquisition Gauge

In creating the appropriate subgroups, we consider not only the static capital available for acquisitions, but also each bank’s ability to generate profits that would contribute toward increasing or maintaining this excess capital.  This process is the only practical way to identify and justify “truly accretive acquisitions” that do not end up diluting the acquirers’ overall return on required post-acquisition regulatory capital.

This explains the left to right slope of the chart. Banks with lower earnings power, as represented by the Invictus Return on Required Capital Ratio, must hold more capital, as represented by Invictus’ Severe Leverage Ratio calculation.

After initial classification, each bank is rated based upon three additional measures.

1.   The Capital Burn Rate, which is the amount by which capital decreases from the bank’s current position under a severe stress scenario;

2.   The ratio between pre-provision net revenue (PPNR) and the bank’s regulatory capital required to support its assets. This process rewards banks whose low Invictus Ratios are offset to a large extent by highly efficient operations (low efficiency ratios);

3.   Banks with unusually high Invictus Return on Required Capital Ratios, but low post-stress capital. These banks are in a position to grow their way into a stronger capital position.

The first two tests can result in a one-notch upgrade or downgrade in the bank’s classification.  This is a comparative ranking, meaning that upgrades and downgrades depend upon the banks’ relative ranking among the entire universe of community banks. The results of these additional measures are why some banks appear to be outside their natural band. 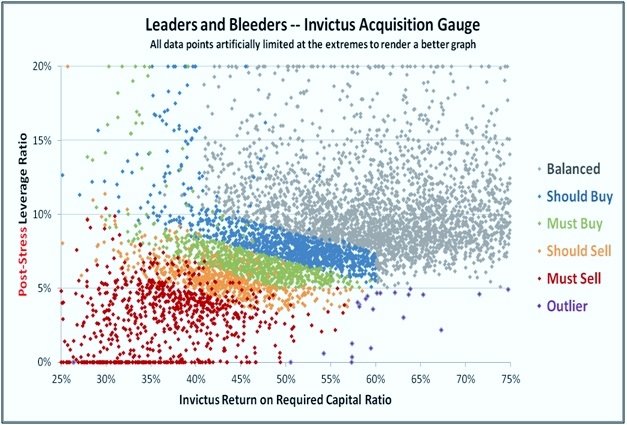 The Invictus Acquisition Gauge measures the true return of banks assets against the capital required to support these assets. After stress testing each bank, calculating an individual post-stress leverage target consistent with prevalent PCA adequately capitalized guidelines, we plotted the position of the bank with its post-stress capital levels against the calculated Invictus Return on Required Capital Ratio. This helps in the identification and relative ranking of bank acquisition targets.